“Family Law Room 201.  Get Help Now!”  read a handwritten post-it note stuck above my office door.  My daughter, then age 8, wrote the note while at my office after school one day.  While there was a sign with my name outside the building, she noticed that my office door lacked signage, a glaring oversight to her keen eye, which she took upon herself to rectify.  She mounted the note above the doorway unbeknownst to me while I was focusing on my work.  I noticed it the next day when I returned to the office, and it made me smile.  So often she would ask: “What is it that you do that you have to work so much, Mommy?”  Although my work is very complex, I tried to distill my work to its most basic level: “I help people with their problems.”

As the years passed, my daughter grew to learn much more about my work.  By age 14, she was very experienced at the art of late night trial prep, adding last minute exhibits to trial binders, and organizing them based on who received which copies.  But she still understood that at the core of my work – everything from the excitement of trial to the mundane of late night photocopying – all ultimately distilled to doing the best I could to help my clients through the struggles they faced. 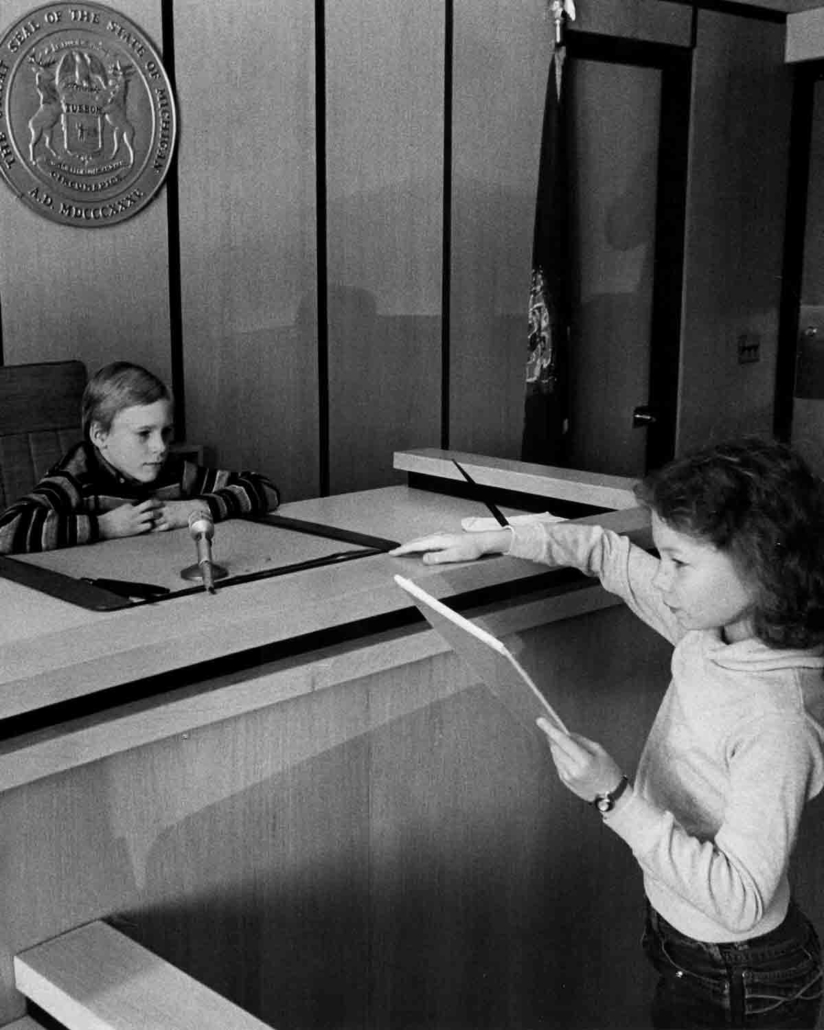 From as far back as I can remember, I wanted to be a lawyer.  I’m not even sure what my 10-year old self thought a lawyer did.  But I knew they had special knowledge, and I wanted that.  When I participated in an extra-curricular summer program where we could role play, I chose to roll play being a lawyer.  In high school when we had to pick a potential career to explore, I chose a lawyer.  Along the way, everyone told me it was a bad idea.  “Girls don’t become lawyers.”  “That sounds too hard.”  “Are you sure you don’t want to do something easier?”  I persevered.  I attended the University of Chicago for college and then I achieved my dream of completing law school and becoming a lawyer.

After so many years of dreaming about being a lawyer, my first job in private practice wasn’t what I expected.  I worked at a demanding civil litigation firm, with a high billable hour expectation and a firm culture where only work mattered.  Most of my work centered around whether an insurance company should pay for damages.  Working so hard and sacrificing time with my family to save money for large insurance companies was not what I had in mind when I choose to go to law school.  I needed to find something more fulfilling.

I then had an opportunity to incorporate family law into my practice.  My cases were always interesting, my clients were human beings I cared about, and most importantly I felt that my work made a meaningful difference in my clients’ lives.  I decided to focus my practice entirely on family law and have dedicated my career to helping individuals through the challenges of the major life changes that accompany divorce and the struggles of co-parenting apart.

Along the way, not only did my practice evolve, I evolved.  I went through my own divorce.  I am thankful that I have a positive relationship with my co-parent and we have always been able to work out our differences with a minimum of conflict.  I’ve experienced first-hand how important it is to place your children first and how they will thrive if you do so despite divorce.  My daughter is now in high school, serving on the public library board, studying math, thinking ahead to college, and hopes to become an actuary or have another math-related career.

I’ve also experienced the more difficult aspects of relationships that have gone bad.  I married an alcoholic who was unable to control his drinking.  Having dedicated my career to helping people with their problems, it was difficult for me to accept that I could not fix his addiction.  After two years of living with his constant drinking, I finally left when I felt I was no longer able to safely live in the home with him.  I’ve moved on from that relationship, but I have not forgotten how difficult it is to watch someone’s life destroyed by alcohol addiction and the profound ripple effects addiction creates for the entire family.

Just as going through law school and becoming a lawyer has shaped me, each of these experiences has shaped the lawyer I have become.  I understand that the path forward isn’t always easy, but if the end goal is something you want, then it is worth it.  I know that leaving a bad situation is far easier said than done, but doing so is usually the best option, as it opens up the new possibilities.  I’ve seen how a child can flourish when not weighted down by the burden of having to choose between parents.  My personal and professional experiences have deepened my belief that children do best when conflict is kept to a minimum.  My approach is always to take the path that is as low conflict as possible.  By taking this approach, my goal is that more children will have parents who can sit side by side, feeling secure in their love for both parents, and I will know that I am fulfilling my statement to my daughter that I help people with their problems.

Licensed to practice law in the State of Michigan and Oregon. Serving clients in Kent and Ottawa Counties in Michigan.